Posted on September 16, 2013 by dontdestroyrelationship 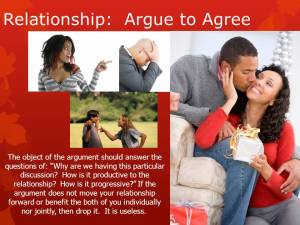 Arguments cannot be avoided in relationships.  Usually, we handle them badly.  Consider an argument, any type of argument between you and your partner resulting in the country having to go to war.

The same concept should apply to your relationship.  Your argument should be constructive, and logical.  Not based on emotional feelings alone.  Arguments call for both partners to be objective.

If the argument with your partner resulted in saving lives, you would most likely be bartering, compromising, rethinking your position or looking at your partner’s position objectively.   There are lives weighing in on your argumentative position.

Your relationship after ending the argument is extremely important. It will not have to create world peace, but peace is crucial to your togetherness and harmony as a couple.

Arguing to agree, should be the shared foundational understanding.  Meaning, that both of you will provide different vantage points on both the approach and expression of your argument.

According to Queendom, The Land of Tests, in the article called, Arguing and Relationships, it makes a valid point of, “A healthy relationship has room for an open confrontation and constructive criticism. If the couple fights constructively, the arguing becomes less frequent, and communication becomes more effective. The relationship becomes a ground for personal growth. The partners get past their defensiveness and start to work out their inner conflicts, to heal old wounds, get over their insecurities; simply put, they evolve as individuals and as a couple.”  http://www.queendom.com/articles/articles.htm?a=8

During the course of an argument, responding defensively causes an offensive response from your partner. Both responses remove the focus from the subject of discussion. It puts both partners in the position of having to emotionally self-protect.  Once this happens, the argument becomes bigger than it needs to be.

My response was, “Unless we were there, we cannot speak on here say.”   This person got pretty pissed and basically thought I was defending Dick Gregory, when all I was trying to explain was that neither he nor I could validate such information.  Becoming further upset, he said, “Well, do not allow me to take your Dick Gregory away!”   (huh?)

When I saw this person becoming emotionally upset, to the point, he needed to curse to defend his position; I asked him, “Why are we taking the discussion to this level when Michael Jackson is dead?  This discussion is a moot point.”

I simply ended the conversation by saying, “This makes no sense to me.  I am not going to argue with you about someone who is dead.  I have work to do that I have to get back to.  I am going to say goodbye and hang up.”  This made more sense to me, rather than going on and getting more involved about something that had nothing to do with us.  We hung up.

I waited 20 minutes, and called him back saying, “I hope we are good.  I am not getting into an argument with you about something that has nothing to do with us, and we cannot confirm such statements.  Being highly emotional about it solves nothing.” His response was, “Yea. You are right.”

When it comes to your feelings, try to be as objective as possible.  If your feelings cannot be validated by something concrete or if they cannot be supported by an absolute, a statistic, or experience, do not create an argument on an emotional tangent.  Proceeding down this path, will be more destructive to your relationship, than productive.

I am passionate about Relationships. To be in a Relationship you need skills. Some of the best skills to have are: a creative perspective, strategy in developing a win-win for both sides, be able to speak and receive honest communication, stay persistent, yet calm in conflict, some negotiation skills, and humor. These skills and more you need--- without emotion. If you have logic as the primary and emotion as secondary, there is nothing you cannot overcome in a relationship. I tell you how you bring destroyers into your relationship. Join me! It is a fascinating and revealing journey.
View all posts by dontdestroyrelationship →
This entry was posted in Settling and tagged arguing with your partner, relationship agreeing to make peace during an argument, relationship arguments. Bookmark the permalink.