Posted on April 6, 2013 by dontdestroyrelationship

Do you “Bring it Hard” in your life? Are you maxing out your potential, gift, talent, efforts, work, love, intellectuality, sexuality and relationships on every level? What ever you do in your individual life, you bring collectively in to your relationship. If you are not a go hard person, making moves and growing, your relationship, by your contribution will be stagnate, boring, dull, and predictable.

I am featuring a brother who is maxing his potential in spite of and despite of. 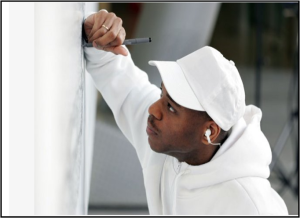 His name is Stephen Wiltshire. “Stephen was born in London, United Kingdom to West Indian parents on 24th April, 1974. After spending the early years of his life as a mute, Stephen found his voice through drawing.” At the age of three he was diagnosed with autism, and drawing began to be the way he communicated with the world. At age nine he began to speak and his art continued to flourish.  http://vimeo.com/26599306

Despite his handicaps, Stephen has become a “worldwide wonder.” He has an artistic ability to draw anything, on a massive scale, like going for a 20 minute helicopter ride around New York, only to draw the city’s skyline in three days from photographic memory. His work is popular all over the world, and is held in a number of important collections.

After researching Stephen, he has pushed me to go harder in my work, and in my life. I do not have any handicaps, so there is no excuse for me not to be successful. There is no reason for me in not meeting my goals. What is stopping me from using my talents and gifts? I have no excuse!

Here is the commercial with Stephen. I have inserted other links surrounding him. May you be just as inspired as I am!

I am passionate about Relationships. To be in a Relationship you need skills. Some of the best skills to have are: a creative perspective, strategy in developing a win-win for both sides, be able to speak and receive honest communication, stay persistent, yet calm in conflict, some negotiation skills, and humor. These skills and more you need--- without emotion. If you have logic as the primary and emotion as secondary, there is nothing you cannot overcome in a relationship. I tell you how you bring destroyers into your relationship. Join me! It is a fascinating and revealing journey.
View all posts by dontdestroyrelationship →
This entry was posted in Settling. Bookmark the permalink.

1 Response to Bringing It Hard