Posted on February 2, 2013 by dontdestroyrelationship 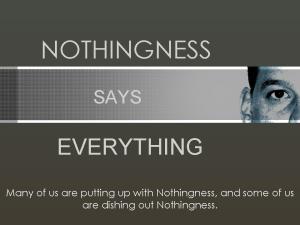 “It’s often said that you can’t get something from nothing. And while this may be true for most practical applications of your life, it isn’t true for our physical Universe.” http://scienceblogs.com/startswithabang/2011/08/16/the-physics-of-nothing-the-phi/

This statement may be scientifically valid, but from the perspective of relationships, do not underestimate the power of Nothingness.

A woman arrived on my blog, because she typed the words, “why a man won’t kiss or say I love you back.” It broke my heart that she is going through that, and even more heart wrenching is she knows the answer she is searching for.

If he is not touching you, he does not want to. If he does not want to return your love in action, word, or deed: he will not do so. We have seen men climb mountains for pussy. He is giving you Nothingness— code for, “I do not love you.” “I do not want to. I am not into you. I will not…I do not….” He is giving you a bunch of Nothingness that says everything. It is no different for a guy involved with a woman who is giving him a bunch of Nothingness. The actions and messages are all the same.

Allow me to call it “the bitch move.” Rather than end it like a man, or end it like a woman, you just do nothing? So-you-just-“do-nothing”-your-way-out-of-a-relationship? Ultimately, one person is stepping out of the relationship by doing nothing, yet appearing to still be a part of the relationship. (Yes, being there implies being in!) The response of Nothingness is deceiving, misleading, and manipulative while controlling a situation. It is the beginning of the end without the confrontation of saying, “The End.”

To maintain the balance of goodness in the relationship, both should be willing to bring all of their individual value into the relationship. But sitting back and receiving all the goodness, with a response of Nothingness, is totally unacceptable.

Nothingness operates in one of two ways: The arrogant and entitled individual who flagrantly holds no regard for your love; or the coward, who eventually slips out, because the fear of saying anything is just too hard.

It is time to reconcile and count up the costs.

Sometimes we get lost in someone. We forget there is a big world outside of our four walls. Explore! Expand! Accelerate the Life Pedal a little bit! Do not allow one person out of millions of people cause you to shut down to Love. Use the pain to dive into something that is productive. Allow some good to come out of your experience, and work in your favor, despite the nothingness.

I am passionate about Relationships. To be in a Relationship you need skills. Some of the best skills to have are: a creative perspective, strategy in developing a win-win for both sides, be able to speak and receive honest communication, stay persistent, yet calm in conflict, some negotiation skills, and humor. These skills and more you need--- without emotion. If you have logic as the primary and emotion as secondary, there is nothing you cannot overcome in a relationship. I tell you how you bring destroyers into your relationship. Join me! It is a fascinating and revealing journey.
View all posts by dontdestroyrelationship →
This entry was posted in Actions in Relationship and tagged arrogant, coward, expand, explore, giver, love, nothingness, relationship, taker, value, zero. Bookmark the permalink.

5 Responses to Nothingness says Everything